The challenge: To simultaneously change the therapy algorithm.

An international pharma company was expecting approval for a new late-line treatment in the German market Patients would be identiﬁed by a new diagnostic. What’s more the new treatment would be available only in combination with an established drug, which was itself controversial in this therapy context. It was unclear how inﬂuential German experts would react to the combination. How would they rate the Mode of Action and study data? Would they back the new drug in combination with the diagnostic? Which patient proﬁles would they target for the new treatment?

The unestablished diagnostic was likewise problematic, and physicians’ reception unpredictable. Which pathologies would it indicate and at what cost? Above all, would pathologists be adequately reimbursed?

In close cooperation with the company, Metaplan swiftly initiated a national advisory board, applying our trademark three stage methodology.

Prior to the board, we selected clinicians and pathologists for interview, taking care that our respondents represented the full range of viewpoints in the peer group. We probed the HCPs’ professional attitudes toward the data and diagnostic. The interviews revealed how the new drug might change existing workﬂows and identiﬁed factors that could hinder or facilitate the launch.

We used the experts’ input to develop a dramaturgy for the advisory board itself – a sequence of questions and contributions that form a debate strategy to guide the work of the group. The dramaturgy drives the discussion forward. It encourages participants to explore key issues with the level of detail required to deﬁne viewpoints and statements that can potentially serve as a basis for the next steps of the launch.

At the client’s request, we engaged a pathologist who had been actively involved in international studies of the new drug‘s companion diagnostic, including the scoring system. Together with German pathologists, we identiﬁed potential obstacles for broad use of the assay in Germany, and deﬁned how they could be conquered.

At the advisory board, Metaplan carefully and quickly guided the discussion toward concrete results, visualizing interaction on boards to avoid repetition. We addressed the key issues identiﬁed by the peer group in stage I, such as the assay and scoring system. We dealt swiftly with commonalities, allocating more time to major barriers. For instance, whether the cut oﬀ for positivity was clinically comprehensible and relevant We explored the key issues behind contradictory views and helped the group formulate explanations that made the consequences of their diﬀering standpoints clear.

An eye-opening peer to peer discussion, followed by our succinct assessment of the consequences. Thanks to the wide range of views and insights revealed by the board, the client was better able to evaluate the challenges and opportunities associated with bringing their new drug to market.

Our assessment subsequently guided the client’s decision-making process. For example, by listing the pros and cons of introducing the new diagnostic prior to the launch of the drug In a separate meeting we guided the client through the analysis, deﬁned next steps and assigned tasks. For example, how to make the companion diagnostic available for a competitive price, how to develop a nationwide roll out for a round-robin test, and how to use the clinical arguments indentiﬁed for the new drug to gain market access. 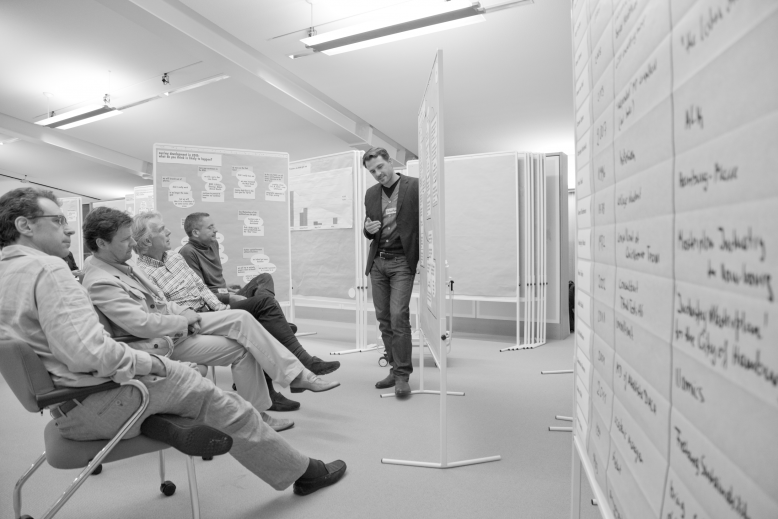 Case Study
The launch of the first cancer drug

Preparation of a fully-fledgedlaunch strategy to prepare the market for the paradigm shift to achieve exclusive branding.